Collective Mining (TSXV:CNL) has announced major assay results from the Olympus Target within the Gauayabales project in Colombia. The results were from four additional diamond drill holes, and included 216.7m grading 1.08g/t gold equivalent. The company has also expanded the target area for follow-up exploration based on revised geological modelling data. Guayabales has seen multiple discoveries and follow-up drilling, as part of the minimum 20,000-metre program in 2022. The drill program is fully financed, with three diamond drill rigs operating at various targets.

Ari Sussman, Executive Chairman of Collective Mining, commented in a press release: “The Olympus target is advancing rapidly due to our exploration work and geological understanding and this has resulted in a 125 percent expansion of the target area. We are extremely excited about the precious metal potential of the system given the broad intercepts of gold and silver mineralization encountered in early drilling, the sheer size of the alteration system and the plethora of high-grade gold and silver-bearing, porphyry related, CBM veins. All the ingredients are in place for Olympus to evolve into a multi-million-ounce precious metal deposit. As our team understands full-well from our prior experience of exploring and developing the Buriticá project in Colombia, porphyry-related CBM veins can demonstrate robust continuity over significant vertical and lateral dimensions. Analogous to Olympus are both the multi-million-ounce high-grade Marmato and Buriticá systems, with each deposit measuring more than 1.5 vertical kilometres. The Marmato project is located approximately 3 kilometres to the southeast of Olympus and is situated within the same structurally controlled, porphyry intrusion – CBM vein, corridor.”

Highlights from the drill results are as follows: 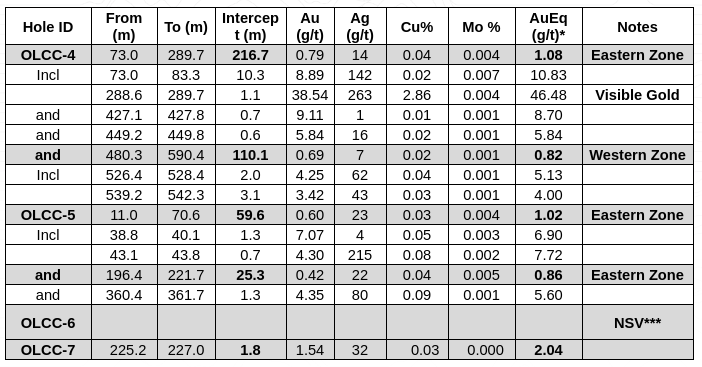 Recovery rate assumptions are speculative as no metallurgical work has been completed to date.

** A 0.1 g/t AuEq cut-off grade was employed with no more than 10% internal dilution. True widths are unknown, and grades are uncut.

*** No significant values reported in this intercept